You are here: Home / Film & TV / 4 Things You Should Know About Daredevil 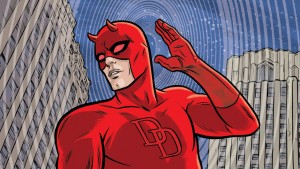 For those non-comic book fans, the plot around Daredevil revolves around Matt Murdock, a blind attorney, and who uses his fighting skills and heightened sense to right wrongs at Hell’s Kitchen, New York.

Apart from this, here are 4 things that you should know about Daredevil:

Almost everyone remembers the 2003 movie Dardevil whether they appreciate it or don’t. Unfortunately, the collaboration between Marvel and 20th Century Fox was criticized and the movie was considered as one of those superhero flicks that didn’t quite “get it”.

#2: 2003 Daredevil was not the first audiences saw Matt Murdock

Long before Affleck donned the role of Matt Murdock, Rex Smith wore the all-black costume in a made-for-television movie titled ‘The Trial of the Incredible Hulk”. Of course, a number of attempts to make a Daredevil television show in the 70s and 80s failed until now.

Blinded as a child from an accident, Matt Murdock is an attorney who has a radar sense that helps him “see”. What also helps is that his other senses such as that of taste, touch and smell are enhanced compared to other men. Along with this, as an attorney with a brilliant mind, he is perfect superhero material.

Charlie Cox who is best known until now for his multi-season role at Boardwalk Empire is playing Daredevil. He’s also appeared in “The Theory of Everything” and “Stardust” too yet seems to be a good choice as he is experienced but still is a fresh enough face.