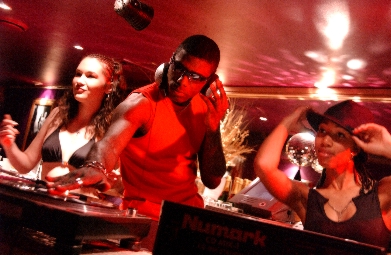 , founder of Blam! Studios and then Blam! Records, was instrumental to the UK Garage scene. At the start of the Blam! Records, a growing number of West London record labels released UK influenced House tracks. These early releases formed the foundation for the “UK Garage” scene. Jules big dream was sound, and through Blam! Studios, he helped numerous artists create electronic music at a time when it was expensive and audacious to do so.

His early career as a computer operator in the City of London working for various financial institutions helped him achieve his dream to work in sound. On application to the BBC, and numerous recording studios of the day, he was met with repeated rejection.

He knew this new sound was not going away, so Jules saved everything he could from his career in computers to collect a raft of electronic music equipment. 16 track reel to reel recorders, mixing desks and early sampling equipment filled his space. This significant investment and risk came at a time when sequencing and sampling were still cutting edge and relatively expensive.

Jules launched Blam! Studios in West London in 1990 from his front room when the label first opened its doors. The studio quickly grew and relocated to Acton and then Kings Cross WC1.  Jules was inspired to name the studio from a pop art painting by American artist Roy Lichtenstein.

The studios were an early success. In the early ‘90s electronic music was on the rise, but the equipment necessary to create it was still out of reach for most. Studio hire was the best option for many. Blam! gave artists such as Trans-Global Underground, and numerous early jungle and drum and bass artists, a platform. Notable clients included Graham Gold (Kiss Fm), Ras Kwame (Baby  Shack Recordings), Mike “Ruff Cut” Lloyd.  The studios also recorded a remix for PJ & Duncan’s Let’s Get Ready To Rumble (Mutley Mix) Telstar and various small labels.

The label released 13 tracks between the years 1993-2000, with CD compilations on Dialogue Recordings that included work from DJ Mike “Ruff-Cut Lloyd” under the Essential Underground House ‘N’ Garage in 2000. The first release on 12-inch vinyl in 1993, X-Plode! Feat Anetta Gordon‎– Uplift My Soul (Desire), was a full vocal House number with 3 additional mixes. DJ’s all over the world, including Paul “Trouble” Anderson (Kiss Fm) , played it for huge audiences.

In the late 1990s there was a shift from “Four to the Floor”  UK Garage to “Speed Garage” and “Two-Step”. The label experimented with these two genres via limited edition releases Big Loud and Massive (Work It Hard- 1998), Big Loud and Massive (Garage Flava – 1998) and Mista Jules Feat X-Plode! And Big Loud And Massive (Various – 2000).

Recording studio clients also went on to success in the UK Garage scene including the aforementioned Ras Kwame and M-Dubs. The release of X-plode! “Hold Your Head Up High” – 1996 saw the label achieve Music Week industry dance chart success.