You are here: Home / Celebrities / Scott Disick Says That Dating Kourtney Was Not Fulfilling 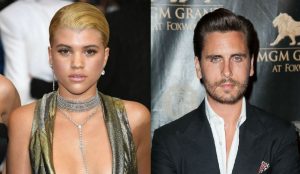 Scott Disick has had an on-again-off-again relationship with Kourtney Kardashian for many years. However, Scott has been open about how he is finding it hard to move on from the mother of his three children.

He said that he now tries not to watch the show because last time he did he saw his ex with another man on a vacation, and her scenario looked a lot happier than his, which involved jumping from one woman to the next.

When he spoke to Kim about this on the show, she said that Kourtney would be happy if Scott found someone as she is concerned that Scott is drinking and partying a lot.

But Scott spoke back and said that Kourtney never expressed these concerns to him and he also said that he is younger and may have different ways of dealing with the issue. He went on to say that he feels insecure and afraid that he will lose all those close to him.

However, Scott has recently found happiness with 19-year-old model Sofia Richie since filming this episode. At present, that pair spent a lot of time together and seemed to enjoy each other’s company.

The new couple have taken many holiday’s overseas and are openly affectionate even when paparazzi are around. Since Scott hasn’t had many serious relationships in the past, this may be the best way for Scott to move on from Kourtney and the Kardashian family.