You are here: Home / Celebrities / Serena Williams becomes a mother 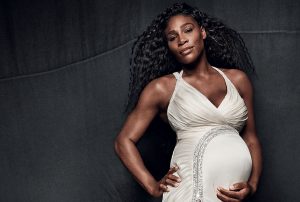 With 23 grand slams under her belt, Serena Williams has now embarked on a new adventure.

Williams gave birth to a baby girl with fiancé Alexis Ohanian. Williams said that at first she was shocked to find out that she was pregnant as it was unplanned. To add to the surprise her finance the Reddit co-founder popped the question, and the pair are now engaged.

Although the pair didn’t find out the sex of their baby, they always knew it was a girl. She said she knew that she was a girl because two weeks before she found out she was pregnant, she played the Australian Open in 100-degree weather, and her baby never gave her any trouble.

The star said that she had a very good pregnancy and she hardly felt any different and often forgot that she was pregnant. She said that she enjoyed the entire experience.

Before she got pregnant, she knew she was ready to have a baby because she was thirty-five and she felt that it was time to be a mother.

Although Williams is taking a break from her career, she says that her time isn’t over and that tennis has and will always be a big part of her life.