You are here: Home / Entertainment / How “The Walking Dead” has Changed AMC’s Fortunes 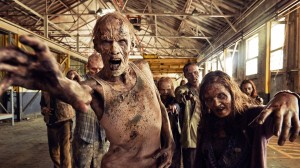 AMC, since its early days, was actually a distributor. But in 2007, all that changed as they brokered deals where they were given exclusive rights to broadcast Mad Men and Breaking Bad from Lionsgate Entertainment and Sony.

And then, Walking Dead happened in 2010. Only this time, they didn’t negotiate with a studio but actually worked with Robert Kirkman to produce the series and which was based on the comic books.

In this case, AMC wanted to control both production and distribution as it would mean extra income from licensing and syndication as well as Blu-ray sales, DVDs and downloads too.

So, it shouldn’t be surprising that AMC wants to own more television shows even though producing them hardly comes cheap.

And while this isn’t cheap, the truth is that AMC is cashing in, and would like to continue in the same vein.

Yet it doesn’t come without risk as AMC pays more to produce and distribute properties such as these.

But there’s no doubt that while other channels are looking to acquire hit shows cheap, the channel’s boss, much like HBO, wants to build franchises instead.

Which is what they should be doing, after all…