You are here: Home / News / Arrow to introduce the ‘magic’ element into the show this year, says Guggenheim

In the last Arrow episode, Ra’s Al Ghul had made an offer to the Arrow – one that would be silly to refuse – to replace him as the head of the League of Assassins.

However, executive producer Guggenheim, in an interview with Variety believes that this isn’t such a crazy idea, in saying, “It’s a better offer than people might think. After the offer comes the sales pitch, and the sales pitch is going to be surprisingly compelling. One of the things we love to do on the show is to make the villains’ arguments very believable and persuasive, and Ra’s is probably the best there is at that.” 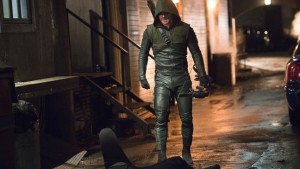 It’s also very clear that Ra’s Al Ghul look very young for a person whose last fight was almost 67 years ago. Most fans know why this so and which has something to do with the Lazarus Pit.

He also admits that a number of episodes have been dropping hints about the Lazarus Pit for some time now and when introduced, could lend that mystical and supernatural element to the world of ‘Arrow’.

In fact, this aspect of ‘magic’ is brought out again in an episode where both The Flash and the Arrow meet, as they go head on with Vixen. He also goes on to add that both Oliver and Barry have different views about ‘magic’ since the former has seen the influence of magic while the latter hasn’t yet.

Guggenheim says that while last year was about bringing superpowers into “Arrow”, this year will focus on bringing the “magic” element, suggesting that there might be crossovers from other shows as well.