You are here: Home / News / Gotham: The Blind Fortune Teller – A Review

This week’s episode of Gotham titled ‘The Blind Fortune Teller’ introduced the Joker, also known as Jerome on the show and played by Cameron Monaghan. 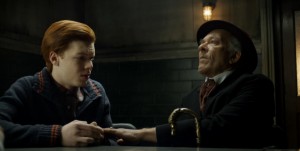 While Bruno Heller said that this episode takes place eight years before the Joker arrives and really kick starts the “beginning of the story of how the Joker came to be”.

But after watching the episode, it didn’t like much of an origin story, given that Jerome already is The Joker – just without the purple suit and makeup.

Of course, based on Alan Moore’s version, the Joker was a do-gooder who lost his mind after having to witness and endure a number of horrors in his own Life. Even Heath Ledger’s portrayal of the The Joker seemed to hint at that origin as well.

For that matter, even Tim Burton’s Joker went crazy but as this episode reveals, Jerome already is. Of course, depending on whether he gets locked up, the only thing that he needs to do is get some hair dye.

What was truly remarkable was how he switched personalities as soon as he realized that Gordon knew that he had killed his own mother.

Apart from this, the episode also focused on the relationship between Gordon and Leslie and their individual quirks, it did end with them having sex for the first time. In fact, Gordon would have been happy to sleep in an actual bed given that he doesn’t have a place of his own. What made that even more obvious was when Leslie cooked him a meal too.

Of course, the other story arcs continued with Penguin not doing well with the nightclub, Fish taking charge at the pirate prison and Barbara finally coming back home to only find Selina and Ivy living there – and Gordon kissing his new girlfriend too.