You are here: Home / Celebrities / Chrissy Teigen explains why she isn’t revealing the sex or name of your baby 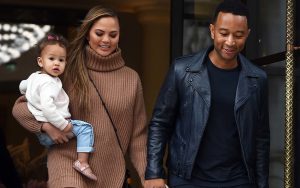 Chrissy Teigen is known to be open and honest about her life. The supermodel recently welcomed her second child with John Legend, and fans wanted to know about their new arrival.

The model said that John had requested to keep the baby’s name and sex a secret as long as she can and the model has said that she will do him this favor.

She said that she and John are still discussing names and she believes in not telling people your options when choosing a name. The model said that usually, this is a bad idea because people always say that they knew someone by that name and that they were not that great.

She added since John picked their first child’s name, she will get to choose their second. Chrissy, however, says that her husband has been great and is now cooking all their meals for the entire family while she takes care of their newborn. Chrissy, however, says that she can be difficult to please as her cravings are unpredictable, which means that John often has to make many different meals to keep her satisfied. She says that food is her comfort and she loves Kung Pao Spaghetti and pizza.

The couple are very excited about their new addition, and so is their little girl Luna. Chrissy said that Luna has been asking for a brother or sister for some time now.