You are here: Home / Film & TV / The Walking Dead: The Story So Far

So far, Rick Grimes and his group have settled in Alexandria. With great difficulty.

Morgan also manages to find refuge at Alexandria, thanks to meeting up with Daryl. This was revealed in the Season 5 finale.

As for Season 6, the first episode titled ‘First Time Again’, deals with a herd of walkers that could make lives for those at Alexandria if something isn’t done to distract them away. The first episode dealt with that barring a big surprise right at the end.

This was revealed in Episode 2 rather cryptically titled ‘JSS’ and in which Carol plays a pivotal role in saving Alexandria despite the presence of marauders who kill without hesitation.

But what could this acronym JSS mean? 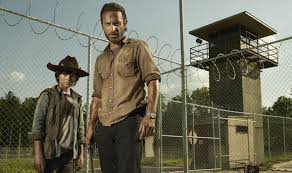 According to Google, JSS would either mean Joint Surveillance System or Joint Security System given the context of these two Walking Dead episodes.

Which also begs the question: Is the gang that attacked Alexandria known as the ‘Wolves’?

If it is, then this will pave the way for the character known in the comic books as Negan. Of course, rumor has it that his presence will be felt in the finale of Season 6.

So, it’s not necessarily walkers – even in large numbers – that are a threat to Rick’s group but possibly the Wolves.

As for the rest of the occupants of Alexandria, it’s clear that they are lucky to have found a home ever since the walkers have overrun the planet. What is also abundantly clear is that they have to learn to survive and fight even if they are safe and protected within the walls of Alexandria for the moment.

This was especially evident in Episode 2 of this season as they struggled to fight back the gang.

Season 6 of the Walking Dead airs every Sunday on AMC.