A number of fans who are eagerly waiting on the return of the Walking Dead series on AMC after the mid-season will be pleased to know that a video has been released with the cast and producers describing what to expect from episodes in 2015. 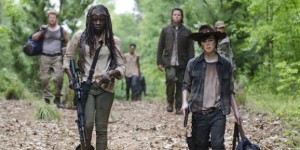 Posted at AMC’s official YouTube account, the actors, actresses and producers have spoken at length about the show’s direction, with about 8 more episodes to go before Season 5 comes to an end.

In particular, Scott Gimple, the Walking Dead’s executive producer, says that these episodes has an “interesting structure” where Rick and the rest will have to deal with a number of crazy and emotional moments. Also, there will be a big change in situation for these characters.

The actor who plays Rick, Andrew Lincoln, says that the new set of episodes feels like they are moving into a completely new show altogether, both visually and in terms of the storyline.

Denise Huth, co-executive producer, goes on to add by saying that these episodes will be darker and emotionally heavy since there will be a few more deaths and trouble to deal with.

With the mid-season finale ending with the death of Beth, who was a fan favorite, viewers were shocked by the events.

Not surprisingly, the following episodes will deal with the aftermath of that tragic incident with Maggie Greene being the first to cope with her sister’s death while also having to fight a dark side of her that she’s always resisted.