You are here: Home / Film & TV / Pink Flustered After Her “Crush” Johnny Depp Surprises Her on TV 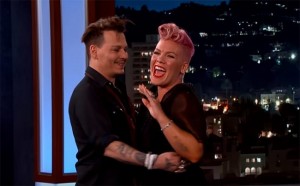 Pink is known for a confidence and her hanging from the ceiling performances, but when she met her crush Johnny Depp, she just couldn’t keep her cool.

She told Jimmy Kimmel that “Him (johnny Depp) and Michael Keaton….I can’t do it. Beetlejuice just gets me every time.”

The married star, 36, explained to Kimmel about an instance where her husband forced the star, to speak to Depp while shopping.

However, the star did speak to Depp about his upcoming film “Alice Through the Looking Glass”, In which Pink sings in the sound track. But Depp mistook the conversation about Alice the movie to mean Alice Cooper, the rock star.

The star was surprised on the Kimmel show, with a second chance. Pink was very flustered at the appearance of Depp, but managed to put together a few words. The star was blushing and said “Go away. That was awful,” she said to Kimmel. “That sucks. I hate you. I hate you.”

“You just turned the color of your hair,” Kimmel said.

“This is the worst day ever,” she proclaimed.