You are here: Home / Film & TV / Walking Dead Season 5 Premiere a success, more gruesome than ever 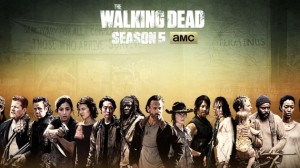 As if it wasn’t bad enough for people to survive the zombie apocalypse, the entire cast of The Walking Dead found themselves in container by people at the Terminus who have a thing for eating human flesh.

Even though the signs that led to them to the Terminus suggested otherwise, the barbecue that the residents were chewing on really gave away their intentions.

In the first episode of Season 5, the story continues but the premiere was jaw-dropping for a number of reasons with us finding Rick, Glen and Daryl finding themselves forced to kneel over the drainage trough where men were methodically cracking the skulls and slitting the throats of their captives to be food later on.

This scene alone made the premiere the most watched show who have come to expect the most brutal acts committed on television. It should come as no surprise that almost 17 million viewers in the United States alone has made The Walking Dead the biggest cable show of all time.

What made this scene all that more compelling was the fact that the executioners were indifferent and even callous to the acts that they were committing apart from the conversation they were having with the leader Gareth who is rather cheerfully psychotic.

However, what has attributed to the show’s continued success is that it isn’t really about zombies but about the relationships between people who have survived and the moral compromises that they might have to make in order to continue surviving.

What’s clear from the first episode that while Rick might be the leader, Carol, played by Melissa McBride, is truly its heart.