You are here: Home / Film & TV / What the ‘Heads Up’ episode of the Walking Dead Means for Television

So, the episode titled “Heads Up” settled the question of Glenn’s death that was the subject of much debate on a number of social media sites.

Of course, the blood and guts that we saw wasn’t his but that of Nicholas. As predicted by many, he cheated death by slipping under the dumpster.

This “gimmick” if one can call it that has been done before on the Game of Thrones with the death of Jon Snow raising much speculation.

Of course, both these shows have been adapted from the comic book series and a set of novels. So audiences have something to compare the show with when it comes to the death of characters. 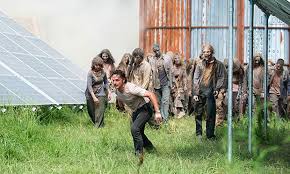 Hence, it can be safely said that with Glenn’s revival, the Walking Dead is definitely staying with the comic book series.

It wasn’t always like this with a number of shows such as Mad Men, Six Feet Under, The Sopranos and now, The Leftovers killing their characters off or not based on fan sentiment.

Yet it might be pointed out that both Games of Thrones and the Walking Dead are different. Pandering to fans is necessary as they are looking for a healthy balance between the arts and commerce.

In stark contrast, one of the most commercial films such as the final installment of The Hunger Games has Katniss’ sister Prim killed. Yet it’s more than a plot twist since it defines what happens next.

As for the Walking Dead, the show might be tempted to play the “fake death” routine more than once even if it really can’t again given all the attention it has received.

After all, death-defying acts are addiction even if it erodes the audience’s trust bit by bit.