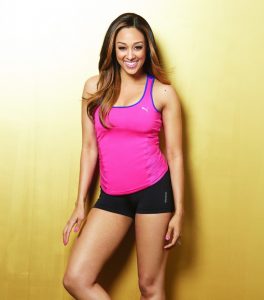 The TV twin, Tia Mowry is showing off her slim figure, thanks to her healthy diet and fitness regime.

Mowry showed off her figure on Instagram when she wore a pair of leggings, a baggy top and lifted her T-shirt to reveal a slim waist.

Tia released her cookbook, called Whole New You: How Real Food Transforms Your Life, for a Healthier, More Gorgeous You, which was in bookstores early this year.

She says that her cookbook is filled with clean meals that will help you look and feel healthier. The book boasts over 100 delicious recipes, which include healthier versions of comfort food recipes, like buttermilk fried chicken, lasagna and crispy collard chips.

Mowry was a victim of body shamers last year when they commented that her new fuller figure was due to her being pregnant. She, however, addressed the rumors by saying that she had put on about 10-15 pounds because of her new cooking channel, Tia Mowry at home.

The star’s new diet is working, for her and she says that she is feeling healthier and happier in her new shape. The star, however, does take days off to indulge and is often seen instagraming pictures of her favorite ice cream.

Mowry has always been a star who shows her real self to the public and her fans, as she often posts pictures that are not retouched. The star often tells women to be comfortable with their own body and look at ways to eat healthier and get more exercise.