Of course, it impacts people at the top of the structure. But that’s not all. It affects those within the structure as they have to conform to new leadership.

In particular, this shift happened when Deanna Monroe asked Rick Grimes to kill Pete. Pete had accidentally killed Reg before this. 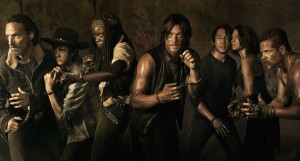 Before Grimes had arrived, Pete’s abuse of Jessi upset the community. There was a brawl that followed between Pete and Rick. That said, with Rick to kill Pete, a break with Alexandria’s traditions is obvious.

In the comics, once Rick kills Pete, he becomes the leader of the community. It’s clear that this transfer of power will take place soon. Apart from this, a clash of ideologies is expected in Season 6 too. Yet, at some point, there will be a big uprising in Alexandria too.

With the arrival of Morgan Jones, there could be a clash with Rick. The latter has killed almost 20 people on-screen. Instead, Morgan takes a rather non-violent approach to survival. This was obvious when he refused to kill a member of The Wolves despite them threatening his life in the season finale.

From the looks of a promotion poster at the 2015 Wizard World San Diego Comic Con International, a ‘civil war’ is on the cards in Season 6.

Will these friends will be able to make a compromise? Will they in turn, get the occupants of Alexandria to do the same?